Skip to main content
March 24, 2018
My Record Collection from A–Z
The Animals: The Most Of

Ok, just for fun, I thought I would try to get through a record a day here on Facebook...alphabetically. Could be fun and maybe a bit embarrassing. I remember an The Onion article once called something like, "Roomate's taste in music is drawn into question by single record in collection." I'll stick to the vinyl...

Anyway, here's the first one. The Best of The Animals. I don't really gravitate towards greatest hits records but I believe my friend Darren Lichty gave it to me in high school. 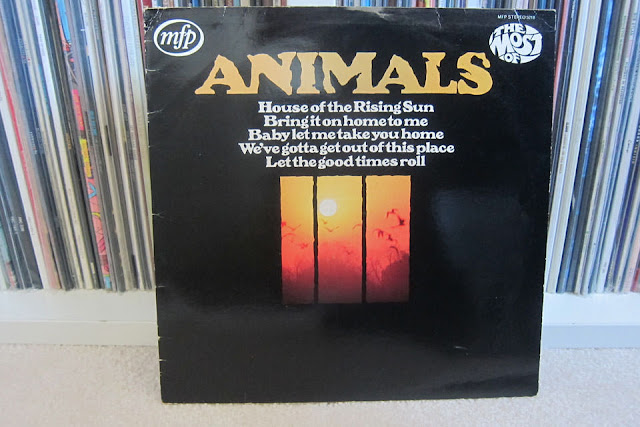 So, that's how I started this project the first time around (four years ago!?). With the Animals. And it's true, there are definitely some records coming up where my taste will be drawn into question. Including this one, not because it’s the Animals but because it’s a greatest hits collection.

I think “The Most Of” was a series of greatest hits records. I should probably get some legitimate Animals albums to put it all into a better musical perspective but this will have to do for now. I think “We’ve gotta get out of this place” is probably my favorite Animals track (at least on this collection). Here’s a screaming, suit-wearing, are they Beatles? Live version:

The most famous song, of course, is “House of the Rising Sun”. It took them to number one and it’s fair to say that their version is probably the most well-known. Their cover became so well-known that it’s often believed to be an Animals song. My first experience with the song was probably hearing the Animals do it. Eventually, I heard Bob Dylan and Nina Simone’s versions and learned that it’s a tune that’s a lot older than the Animals—older than any recorded version. Who knows who sang it first? Here are some links to the history: 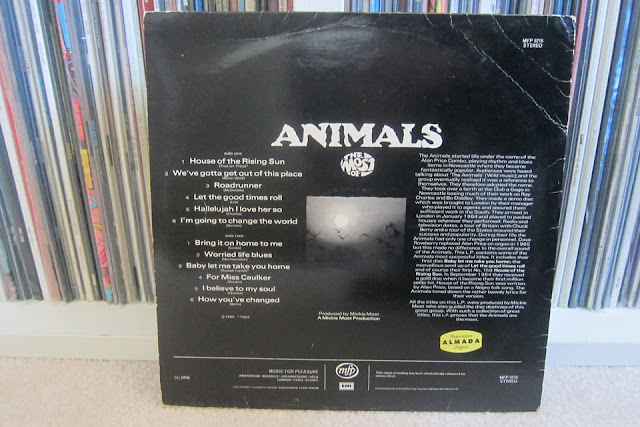 Why do so many artists want to cover this particular song? My recent blog on Alt-J and their cover got me thinking about all the versions out there and led to a bit of research, which quickly took me down a rabbit hole of HOTRS “covers” and opinions. Yes, people discuss it enough that it’s referred to as an acronym. Do you want to cause a dust-up online? Refer to it as an Animals song and call everything else a “cover”. Also, bring up something about gender. Dylan sang his version from a female perspective but the Animals went with the male point of view. Early versions seem to be male or female and not necessarily related to the gender of the singer. Some female singers choose the male point of view., Seems unclear, historically, what the original gender of the protagonist was? Without getting too academic, Walter Ong’s book, Orality and Literacy comes to mind. He posits the thesis that in oral cultures, the exact details of the narrative aren’t as important as the core facts or moral that is being communicated. Maybe that’s the case here…

It might be overly reductive but after listening to a lot of interpretations of the song, I’ve started dividing them into two camps: versions that focus on exploring the narrative; or vehicles for demonstrating the abilities of the singer/musicians. Sometimes both are accomplished but for the most part, it feels like it’s one or the other. And then there are the bluegrass, blues, soul, jazz, folk, etc. genres. Variations in tempo are interesting as well. Pick your favorite.

If you want to take a real deep dive into this song (or any other) check out this website. I just discovered it recently and have pretty much stopped doing anything else.
https://secondhandsongs.com/

Here's a sampling of some of the versions that I've heard in the past or just recently:

Tom Clarence Ashley & Gwen Foster (1933)
The first recording…is this considered bluegrass or just old-time music? Years of indulgent singing and orchestration makes this recording sound so simple, and to the point, almost like reading the story in a book for the first time.
https://www.youtube.com/watch?v=147kS8O59Qs

Georgia Turner (1937)
A really intriguing a capella rhythm to this version…
https://www.youtube.com/watch?v=15VIDcUMQQI

Woody Guthrie (1941)
Please don’t hate me Woody Guthrie fans but this version seems king of soulless to me. Don’t get me wrong, I love Woody Guthrie, his voice and way of making music but there’s no comparison, to me, between this song and his political songs like This Land is Your Land or So Long It’s Been Good to Know You.
https://www.youtube.com/watch?v=UlbLs_bvimU

The Weavers (1959)
A beautiful voice and instrumentation that totally gets out of the way.
https://www.youtube.com/watch?v=ghiCDcrerx0

Joan Baez (1960)
Personally, not a huge fan of folk/Joan Baez. Not sure what it is. She has a great voice but there’s something about her intonation that I find off-putting. Reading the comments to the video, I imagine that there are going to be people who strongly disagree with me. Speaking of the video…it’s very odd. Not sure what movie with Scarlet Johanssen is cut into it? Or what the appearing/disappearing people are all about?
https://www.youtube.com/watch?v=rD80eZ6Gxz0

Bob Dylan (1962)
This remains one of my favorite versions. You can definitely hear the debt owed to Dave Van Ronk…but, oddly, more radio friendly?
https://www.youtube.com/watch?v=RcZ4MQ0wLEQ
An interesting little video excerpt on the arrangement:
https://vimeo.com/49201936

Dave Van Ronk (1964)
It’s hard not to hear similarities in Van Ronk’s arrangement to Dylan’s version of the song. Both fit well into the group of interpretations that are more about building conflict and tension and less about showing off the voice.
https://www.youtube.com/watch?v=NX2ZYLTGu4E

The Platters (1965)
I feel like I should know about the Platters but I’m quoting Wikipedia: “The Platters is an American vocal group formed in 1952. They were one of the most successful vocal groups of the early rock and roll era. Their distinctive sound was a bridge between the pre-rock Tin Pan Alley tradition and the burgeoning new genre “
Nice version.
https://www.youtube.com/watch?v=KmA3FiXEQXA

Marianne Faithful (1965)
Two versions, I’m assuming around the same time? One with more elaborate orchestration (maybe she heard the Weavers version?), the other with drums, guitar, standup base and a smoky jazz club feel. One is twice as long as the other. You can definitely stretch it out or get it over with depending on your mood.
https://www.youtube.com/watch?v=hEyINvK6C5w
https://www.youtube.com/watch?v=jcv938Uxoc0

Frijid Pink (1971)
Let’s just forget about the moral of the tale and just play it as loud and indulgently as possible.
https://www.youtube.com/watch?v=t40INnb6DnY

Chet Atkins and Mark Knopfler (1990)
Recorded for a British music program. The interview segments are interesting as they’re both such phenomenal guitarists. They actually play a really nice “pickin’ and grinnin’” version of House of the Rising Sun at the 2.59 mark but I recommend patience and watch the whole video.
https://www.youtube.com/watch?v=FegE0Df_Zl8&index=26&list=RDxIZ99oQ1piE

Sinead O'Connor (1994)
Interestingly, she sings it from the male point of view. A very breathy, stretched-out version that fits in well with the “I Do Not Want What I Haven’t Got” era. A little over the top.
https://www.youtube.com/watch?v=XUIsFUfxgqw

The Be Good Tanyas (2003)
This cover sounds really predictable if you know this band at all. You may have heard of Jolie Holland. I think she might be a more well-known member…but they’re both worth checking out. Better when they do their own thing, I think.
https://www.youtube.com/watch?v=MH78fqrnsFY

Cat Power (2006)
I came across two versions attributed to her. This was the more tolerable of the two but didn’t have a date. I’m assuming it’s around the same time. So hard to get those words out…so much feeling.
https://www.youtube.com/watch?v=zrd09Ph701U

Five Finger Death Punch (2014)
I watched this so you don't have to. You're welcome.
https://www.youtube.com/watch?v=sXYIxJScSik

Alt-J 2017
Included here because I referenced it in my Alt-J post and above. Otherwise, pretty forgettable.
https://www.youtube.com/watch?v=X1Knskoe15g

"The Voice" Auditions (2015)
All of these versions are firmly in the “vocal demonstration camp” as referenced above. Of course, it’s a talent competition. How many times has this song been sung for a competition? And how many of these singers are trying to outdo Eric Burdon? If anything, watch it for the outfits/reactions of the international judges.
https://www.youtube.com/watch?v=jwtpfeRyt64

My Record Collection from A–Z Alt-J My record reviews aren’t off to the best start, as listening to these three Alt-J records leaves me a bit indifferent in a manner similar to Algiers. Maybe it’s the lead singer’s voice, described in a pitchfork review: “The biggest offense one could take is the way Joe Newman sings through his nose, like a mean-spirited hobbit mocking the singing voice of another hobbit.” Ouch. Maybe it’s the eclecticism of the songs or that music nerd aesthetic that seems to hang over the band. Sometimes all of the layers come together in a captivating way but a lot of the time I’m just wondering if they’re doing one of those “let’s explore a century of musical styles” project. And what is it about English rock bands and English folk music? Can’t say that the genre appeals to my ears and I have to endure it so often—Cream, Led Zeppelin—who hasn’t indulged? But they did win the Mercury Prize and were touted as the “next Radiohead”, so what do I know? Can’t imagine
Read more